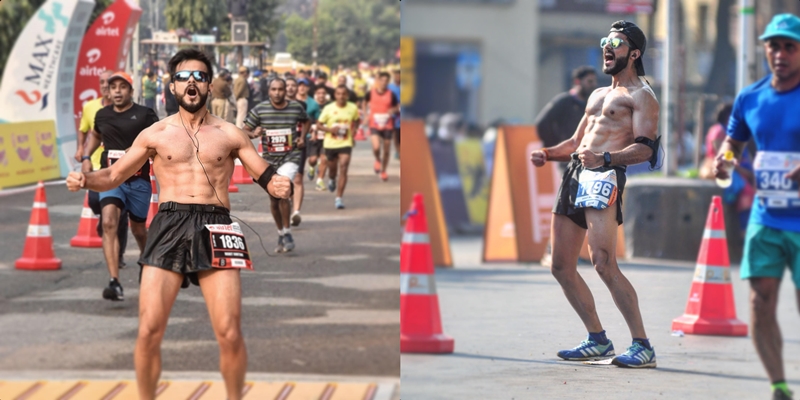 When Mohit Mayunk Bhutani decided to transform his body in 5 months, nearly every fitness trainer told him the same thing, that it was impossible without steroids. But instead of giving in and taking the easier way out, Mohit stayed on track, and in just three months proved every single one of them wrong while setting an example for the rest of us to never give up. Here is the story of the man who proved that getting a drool worthy body is possible, without giving in to the temptation of steroids.

My aim was to loose fat percentage, Gain Lean muscle, Shred and at the same time increase my running pace. Trainers had asked me to leave cardio in order to gain muscle mass, something which I clearly refused. Running gave me my share of endomorphin rush which i clearly wasn’t willing to give up. My transformation journey from 32% to 10% body fat has been done 100% naturally. During my journey to reduce fat percentage in my body I had to undergo different experiments with my diet and workout habits. It taught me incredible amount about my body and overall health. #transformationstory #transformationinprogress #transformationjourney #fitnessmotivation #fitness #iamrunnerin #mumbairunners #runnersofinstagram #runnersofindia #fitnessblogger #instagym #instarun #instagymfit #instapic

The Race Towards Transformation

Mohit Bhutani’s love for running began nearly 3 years ago in the year 2015. Since then, Mohit has run 20 half marathons and 4 full marathons. In June 2017 he set two new goals for himself –  to complete the upcoming Airtel Delhi Half Marathon in under 1 hour 45 minutes and to gain lean muscle mass. All this in just 3 months!

Before his transformation, Mohit weighed 78 kilos with nearly 30% body fat. Clearly the path ahead would be difficult, especially without a mentor. This was when he approached numerous fitness trainers for guidance. He says,

“Most of the fitness trainers said that it’s impossible without steroids, especially if I continued doing cardio.”

Instead of heeding these imprudent advises, he resolved to stay on track and prove to the world that body transformation is possible without steroids. Thus, he began his race against time.

You may also like: From Flab To Fantabulous – The Fitness Journey Of This Yummy Mummy Is The Motivation You Require At The Moment!

Mohit balanced his cardio with weight training focusing on core strength, legs and muscle mobility. In an intense 1 hour gym session, he trained hard under the watchful eyes of a personal trainer. He also hydrated regularly and made sure he never missed pre-workout warm ups and post workout stretching.

Mohit also made sure that his diet was in sync with the workouts. He had divided his transformation journey into 2 parts: strengthening and shredding. Accordingly, he played around with protein, fat and carbohydrate consumption during each phase.

During the strengthening phase this was how his diet looked like:

During the shredding phase he followed a high protein diet:

Hard work is nothing without sacrifices. For Mohit, one of the most difficult things for the next 3 months was to cut down on sweets. He even carried home cooked food to the parties. Alcohol was absolutely banned and cheat meals were few and far in between (once in 3 weeks). He was also drinking close to 4 litres of water every day.

Set Back And Bounce Back

They say God has a way of testing your resolve. For Mohit, this test came in the form of a nasty accident in the month of October, just 6 weeks before the Airtel Delhi Half Marathon. This accident resulted in a badly injured right shoulder which prevented him from training with weights. As if this wasn’t enough, Mohit had injured his toes so badly that he couldn’t even put on his shoes.

Such were the injuries that for a moment Mohit felt like he wouldn’t be able to make it. Even small efforts like slipping in and out of the gym outfit became a herculean task while the pain from lifting weights would bring tears to his eyes. But instead of giving up, the pain just made Mohit grow even more determined to accomplish his goal. The next few weeks were a blur as Mohit braved all the discomfort and concentrated on his core and legs. He worked out at the gym BAREFOOT! Throughout his ordeal, he had tremendous support from his family and friends.

Crushing It On D-Day

After months of hard work and a ruthless training regimen, the D-Day had finally arrived and all the blood, sweat and tears paid off. He beat his personal best by finishing the half marathon in just 1 hour 41 minutes, an improvement by 8 minutes over last year’s record. Not just that, he also went on to crush Tata Mumbai Marathon by completing the distance of 42.2  kilometers in 4 hours and 2 minutes, a massive improvement of 43 minutes over last year. Not just that, Mohit also brought down his fat percentage from 30% to 10% “100% naturally” as he puts it. A thankful Mohit admits, “This journey would not have been possible without the support I received from my family”.

Mohit’s Motivation and Advice For Others

“It’s the sense of accomplishing something which no one thought was possible.”

His advice for others is this: “You need to have a clear goal with a time frame written. One needs to mark a date in the calendar to remind oneself about the Goal.” Like most successful people who have undergone body transformation, Mohit holds the view that one should never aim to reduce weight; rather the focus needs to be on reducing the fat percentage.

Lose up to 4 kgs in a month with The Clean Bowl – your Personalized Nutrition Partner , (starts @ Rs.1499 only!)

Plans For The Future

For Mohit Bhutani, healthy lifestyle has always been the first priority. Having achieved his objective last year, he has now set his eyes on gaining more lean muscle mass while improving his pace before the next marathon season begins.

A believer in spreading knowledge, currently Mohit is busy teaching the art of transformation to others like him. The personification of an educator’s spirit, we really hope that the tribe of people like Mohit increases in this country. We wish Mohit all the very best in his journey and would like to end his story with his favourite quote:

“The goal of running isn’t to make the pain go away but to learn to tolerate it.”