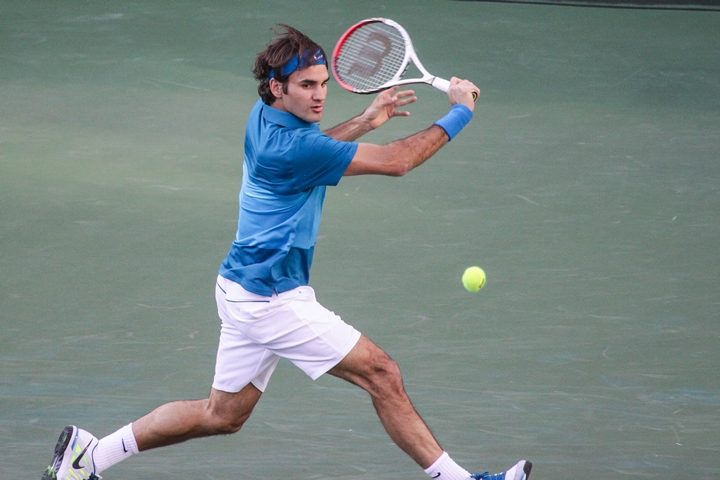 Did you too sit transfixed to you television on Friday night? We do not blame you. While both the semi final matches were had a nail biting finish, the match between Roger Federer and Tomáš Berdych was something else. Though the Czech star put a brave fight, he finally had to give in to the Swiss Maestro!

At 35, Roger Federer has already created a record as the oldest tennis player to reach the finals. Now, as the 18-times Grand Slam winner prepares for the championship we cannot but admires his fitness. So what keeps the God of Tennis going? Read on.

Winning 18 Grand Slams is not easy but carrying the title ‘God of Tennis’ requires commitment on a whole new level. Commitment not just to the game but also towards fitness. How else do you last in the court for 5 hours?!

You may also be interested in Rafael Nadal’s Fitness Secret

Behind each graceful shot that makes your jaw drop lies hours and hours of hard work, sweat and ironclad discipline. Want to know how the Roger Federer goes God mode on his workout? Here’s how:

The Swiss maestro’s warm up consists of jump rope (at twice the normal speed), jogging, butt kick and side shuffle. Not only do these workouts help him improve his cardiovascular fitness and agility but the side-shuffles also helps him build the foot work which is crucial for any tennis match.

After the brief but intense warm-up session, the next focus is on the upper body and the core. The medicinal ball toss helps him work out both these body parts extremely effectively. It also allows for an uninhibited extension of ankle, knee and hip and allows him to develop an explosive power which is crucial while hitting the ball. He also practices plank to strengthen his core muscles further.

Lateral Lunges With A Twist

The lateral lunges are great for the torso and the core. With his feet shoulder width apart, Federer holds a barbell (without any weights) on his shoulder. This movement is followed by lunging on his left leg at a 45-degree angle while lowering the right leg and twisting the left side of his torso forward. This is repeated with the next leg.

Federer also incorporates exercise bands into his workouts. Some of the workouts include placing the resistance band between the legs while practising groundstrokes. The resulting resistance to each leg movement ends up strengthening the leg muscles. The resistance band workout also helps strengthen his core and hips.

The cone drill involves placing three cones in a triangle about four feet from each other. Federer then moves around each cone while doing the forehand and backhand strokes. This helps him coordinate his ground stroke movements with his footwork.

Besides the above workout, ‘Ninja Fed’ also includes a few elements of weight training in his fitness regime such as bench press, leg press, squats, machine fly, bicep and triceps curls among others. But all the workout in the world cannot help you if your body is not properly rested. This is why Roger Federer makes sure that he gets at least 10 hours a day to help his body recover fully and get set for the next day!

Diet For The Gods!

When you are going God mode with your workout, it is only natural to have a God level appetite. And this is exactly where Federer’s iron-clad discipline comes into play. Rather than hogging a huge portion of junk food at one go, the Swiss maestro chooses what he eats very carefully and spaces out his meals.

His diet consists mostly of a high carb breakfast with a good measure of healthy fats like almonds thrown in. Lunch includes lean protein followed by lite dinner.  But this doesn’t mean He never indulges himself. In fact, he does indulge in ice-cream and chocolate every once in a while.

So we saw that what appears to be almost magical on the court, is actually a function of years and years of hard work. We hope that the commitment that Federer puts into his training and his game inspired you in your workouts as well as your life. Enjoy the match!

Disclaimer: The content in this article is purely research based and the workouts mentioned in the chart are suggested by Gympik’s expert trainers.