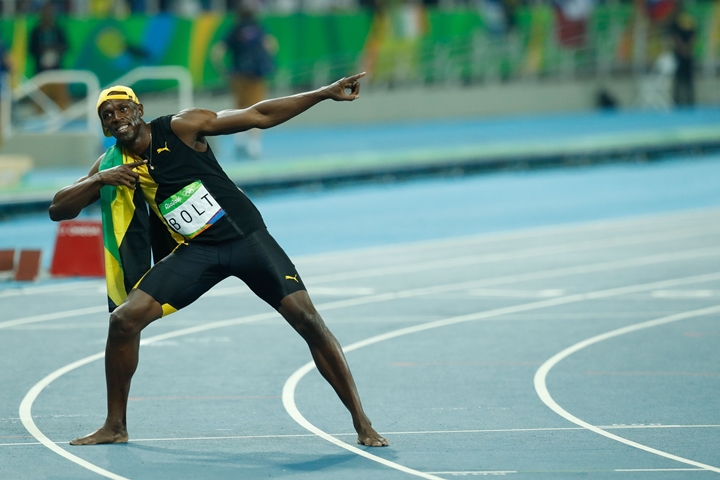 On 6th August, the saga of the Lightning Bolt came to an end, perhaps not the end we had prayed for, but the end it was.

Beginning with an incredible treble gold at Beijing Olympics that made him a household name, Usain Bolt has won a gold medal in every single Olympics since then, not counting the 11 times he won the World Championship.

The Man Behind The Machine

Not satisfied with just winning medals in Olympics, Usain Bolt also broke the record to claim the title of World’s Fastest Man while setting the speedometer on fire with a whopping 44 kmph! To many people, this may have seemed like a miracle but a keen observer would have noted the meticulous hard work, iron clad discipline and years of practice that would have gone to build this man-machine.

So we thought what better way to pay tribute to the man than by exploring the secret behind his hard work? Lo and behold, we present to you the inventory of workouts and diet that went into the making of the world’s fastest man as a professional sprinter, some of the muscles that are involved include Hamstrings, Calf Muscles, Quadriceps or Quads, Glutes and the Core.

Let’s have a look at the various exercises Usain Bolt practice  to chisel each of these muscles:

The bunny hop is an intense total body exercise that primarily targets your lower body including your quads, glutes and your core. It also works out your heart and your lungs.

Step 2: Get into the squatting position and bring both your arms to your sides.

Step 3: Jump as far as possible.

One of the most popular exercises today, Box Jumps are great for training explosiveness. This improves the reaction of the fast twitch muscle fibres in the body allowing Usain Bolt to burst into an explosive sprint. The muscles targeted are hips, hamstrings and glutes.

Step 3: Get into a squatting position and lock your arms on your hips.

Step 5: Jump back to the starting position.

Step 1: Stand with your feet together.

Step 2: Jump and land on your right foot.

Step 3: Jump on your left foot.

The cable knee drive is a great workout that helps runners work on their stability as well as their agility. It helps build the hip flexor strength which is one of the must haves for all sprinters. Muscles targeted include hip, knee and ankle.

Step 1: Use the low cable pulley and put an ankle attachment on your leg.

Step 2: Make sure that the cable is pulled tight.

Step 3: Now lift your knee explosively up to your chest.

Step 4: Repeat with the other leg.

Widely popular among athletes, especially the runners and cyclists, the Hanging Leg Raise is one of the best exercises for core strength. Engaging the lower abdominal muscles, hip flexors and quads, the hanging leg raise helps runners retain posture and prevents injuries.

Step 1: Grab a pull-up bar with a grip slightly wider than your shoulders.

Step 2: Lift both your legs up in the air till your feet are perpendicular to your torso.

Usain Bolt is a foodie! In fact, he once famously admitted to consuming 1000 chicken nuggets during the 2008 Beijing Olympics, along with apple pies and french fries!

But before you get your hopes up for your next cheat meal, a word of caution. While the Lightning Bolt may indeed have been living on a whopping 5000 calories a day diet, we have to remember that this was Usain Bolt we are talking about. The man burnt calories faster than you can say the words Chicken McNuggets.

When not busy consuming entire stock of chicken nuggets in restaurants, he has a fairly regimented and balanced diet that includes lots of protein and healthy nutrients. According to GQ magazine, His usual menu looks like this:

Mango, pineapple, apples throughout the day.

End of An Era

Usain Bolt may have lost the last match of his career but he has won our hearts with his infectious personality, unwavering ethics and legendary speed. While it is no doubt that his name will become a part of many legends in the time to come, we may not have seen the last of the lightning Bolt yet.

In fact, there are rumours that Usain Bolt is planning to finally fulfil his long cherished dream, a career in football. Reports are already pouring in that the Olympian may train with the famous German football club Dortmund! Well, true or not, we would definitely want to wish Usain Bolt a very best of luck in next adventures and we hope he is able to recreate the magic he once created on the track.